3 Ways to Know Your Water Heater is Failing 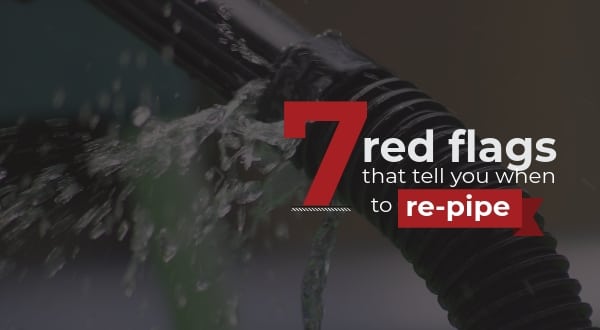 You Know When To Repipe Your Plumbing If…

Plumbing is one of the greatest marvels of the modern world. Sure we have cell phones and smart homes and hybrid vehicles but really, where would we be without hot and cold running water in every apartment and building? Everything from washing your hands to flushing the toilet would be difficult if not impossible and without plumbing. Of course, the infrastructure that an all our modern luxury comes from is our actual physical pipes; so do you know when to repipe? The metal tubes, joints, and faucets that channel our water from the local well or water main through our filters and heaters and out the taps are incredibly important. Unfortunately, not all pipes are made equal. Some are brand new while others are nearly a hundred years old. Some are made of corrosion-resistant alloys while others are a source of rust flecks in your local water for years.

As an HOA officer, apartment manager, or investment property owner, it’s very important to know the right time for re-piping, the process of replacing the pipes in your walls and fixtures. Every building will need to be re-piped eventually as plumbing does not last forever. The question is when to repipe; it’s a little harder to tell. One great source of clues is from your tenants themselves. The quality of the water and behavior of the pipes can be a clear indication that something is wrong and your plumber will tell you if and when to repipe is the answer. Rust is one of the clearest signs that one or more pipes inside your building plumbing have started to decay and worse, it’s decaying directly into your resident’s drinking water. If the tap runs yellow, brown, or red and starts leaving stains on sinks, toilets, and tubs this is a clear sign that there is excessive iron in the water and that a pipe is about to rust through. Rust can also result in a terrible unpleasant taste and rusty water is bad for both drinking and cooking with.

Of course, rust is only the most obvious of the decaying pipe problems. Older pipes can contain a variety of metals and minerals that are bad for people to drink once the pipe starts to break down, especially old lead pipes. If you run an apartment or condo building and there has been an increased number of unexplained illnesses, this could, unfortunately, be a result of the health of your plumbing system and you’ll want to get your water inspected for pipe-decay contaminants.

3) An Unusual Smell in the Tap Water

A smell is another good indication that something is wrong with your plumbing and it’s not always easy to discern. Because plumbing is so often tucked behind the walls and structures, a smell may be your earliest possible warning sign that you need a plumbing inspection and possibly a new set of pipes.

4) Discolored Water without a Known Cause

The vast majority of pipes that decay in place are iron and therefore leave recognizable rust discoloration. Rust is problematic but it shouldn’t be enough to make your tenants sick. Unknown discoloration, on the other hand, should be investigated immediately and the source located as this could indicate a more dangerous situation.

Some pipes, when they start breaking down, become more susceptible to clogs as the inside surface becomes rough, pitted, and corroded. From here, mineral deposits build up on the rough surface along with the corrosion to essentially close off the pipe. When this happens, your water pressure drops. A clog could indicate that you simply need a snake but it could also mean repiping in your future.

Another common result of decaying pipes is frequent leaks as the rust, corrosion, and oxidation results in insecure connections or pipes that have literally rusted all the way through. If you have been struggling with frequent leaks, it may be time to fix the background problem rather than each individual issue.

7) Signs of Mold in Your Pipes

Finally, pipes that are on their way out may become more susceptible to mold than new plumbing made from modern alloys. If you or your residents can smell mold in the drains or see signs of mold growing on, around, or near your pipes, this is evidence of uncontrolled moisture and repairs will be needed.

Know When To Repipe

Many people mistake recurring plumbing problems for individual issues rather than the growing problem of aging plumbing. If your buildings are old or even if they were simply plumbed with less than durable pipes, to begin with, listen to your tenants and pay attention to the water quality. Knowing when to repipe is very beneficial and may reduce possible liabilities. If too many things go wrong in a two or three month period, you may want to consider getting an inspection for repiping.