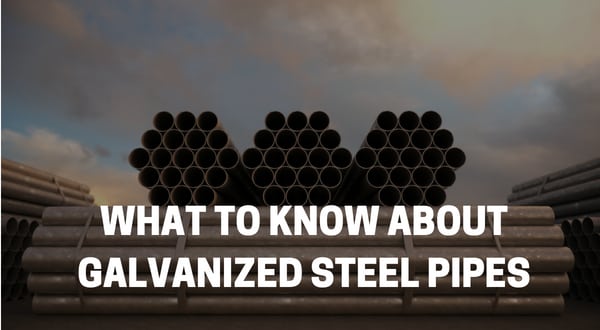 Galvanized steel water pipes are still commonplace in many homes and residential structures. However, galvanized steel is considered to be an obsolete material and should be replaced. Below is more information about galvanized steel.  This including some of the problems it can present and what you should know about concerns raised by its use.

An Evolution in Plumbing Materials

Plumbing materials have evolved over the millennia since the ancient Romans used lead to fashion water distribution pipes. While PEX and copper are currently the most commonly used materials in water pipes, lead pipes were commonly used up until the 1920s.

Once the dangers of using lead in potable water systems became exposed, a shift was made to galvanized steel. During the decades-spanning between the 1930s and 1960s, galvanized steel was the material of choice for water distribution lines inside buildings.

The combination of relatively low cost and material safety made galvanized steel the clear-cut winner when constructing potable water systems. However, as sometimes happens in the plumbing industry, the passage of time revealed flaws with galvanized steel. Ultimately, these flaws demonstrated that new alternatives needed to be used for water distribution pipes.

Galvanized steel pipes are constructed from raw steel coated with a corrosion-resistant material. The coating process, known as galvanizing, involves the use of dipping steel into molten zinc. Pure zinc is an ideal material for galvanizing due to its abundance, low-cost, and low-toxicity to humans.

However, even the best-galvanized pipes will eventually lose their zinc coating due to erosion and the ravages of time and nature. Once that occurs, the raw steel is exposed to moisture and oxygen, and the rusting process commences.

Why Galvanized Steel Water Pipes Should Be Replaced

Galvanized pipes are still commonly found in residences, including multi-family communities, all across the United States. However, they should be replaced as soon as possible due to concerns about health and problems that arise with usage.

Even though pure zinc is the ideal for use in galvanizing pipes, impure zinc containing traces of lead was frequently used in the galvanizing process. That means some galvanized pipes leach lead over time. It ultimately enters the drinking water path for people who live downstream.

In addition, as galvanized pipes corrode, they gradually become narrower and clogged with rusting metal fragments. Though the rust itself isn’t usually harmful, it can alter the taste and appearance of water and cause discoloration of plumbing fixtures and even clothing.

In addition, rust-choked galvanized steel pipes are unable to deliver the needed amount of water to residents. Due to the ever-diminishing diameter of pipes, apparent water pressure will drop when attempting to take a shower, fill a tub, run a dishwasher or use a garden hose.

How to Know if Your Pipes Are Made from Galvanized Steel

For example, galvanized steel is gray and appears similar in color to a nickel, while copper is red, orange. Lead is also gray, but you can tell the difference between galvanized steel and lead through the use of a magnet. The galvanized steel pipe will adhere to a magnet, while lead will not.

If your water pipes are not visible, you will need to use other methods to determine if they are made from galvanized steel. For example, the “symptoms” caused by failing galvanized steel water pipes are also indicators of your pipe materials. The presence of rusty-colored water, poor water pressure, and stained plumbing fixtures are signs that your pipes may be galvanized.

Ultimately, you will need to consult with a plumber if you suspect or discover that your pipes are made from galvanized steel. New Pipes, Inc. is ready to assist you with all your plumbing needs, including replacing galvanized pipe with up-to-date materials.